In Euronews’ Uncovering Europe series, we bring you the best original stories from across Europe every weeknight at 7 pm CET.

Here’s a look at the top long reads from our original series over the past year.

1. Volodymyr Zelenskyy: Why Ukraine’s ‘brave and anti-nationalist’ president is a nightmare for Moscow

He was a multimillionaire comedian, the voice of Paddington Bear and won Dancing with the Stars.

After his TV series based around a man who accidentally becomes president became a hit, he founded his own party and was elected president in real life.

Now, he’s leading a country being invaded by the second most powerful military in the world.

This story gave an early look at the Ukrainian president shortly after Russia launched its full-scale invasion. Zelenskyy would go on to become Time Magazine’s 2022 Person of the Year.

2. Georgia’s EU bid raises an existential question: What is Europe and where does it end?

None of these three countries had previously been considered serious candidates to become part of the EU, but the horror and shock inflicted by the war have suddenly shifted the narrative in their favour.

The largely stalled accession process has now been reawakened and infused with a new meaning, even if the chances for a successful resolution are still low and replete with obstacles.

But for Georgia, another hurdle emerges: is it really part of Europe?

3. Czech unemployment is the lowest in Europe. That may not be a good thing.

For the past three years, Jan worked as a scaffolder for a building company across the border in Germany. Recently, he returned to the Czech Republic after finding a job at a local construction firm.

But his friend, Petr, is now heading in the opposite direction. “Because of the pandemic, I came home. Now restrictions have ended, I’m going abroad,” he said in a quiet pub in Olomouc, eastern Czech Republic.

The Czech economy has long faced a dilemma. It has maintained one of the lowest unemployment rates across Europe in recent years. It now, in fact, has the lowest rate across the whole of the EU, at just 2.2 per cent, according to a recent update published by Eurostat, the bloc’s statistical office.

But economists warn that the rate is low because of a shortage of workers, a concern for Czech industries.

4. ‘I went to rescue wife’s family from a tomb’: Italian’s epic Ukraine trip

It was a blunt and desperate message from his mother-in-law in Ukraine that convinced Alberto, 58, he had to act quickly.

“I am already dead,” she told him on the phone from Kharkiv. “I don’t understand why you insist on calling me. Don’t call me anymore.”

Alberto, an Italian living in Vienna with his Ukrainian wife Svetlana, said from that moment she stopped picking up the phone.

“I went to rescue my wife’s family from a tomb,” the former policeman told Euronews. “I told [myself] that if we don’t go there to get them, we will never see them again.”

When Moscow first invaded Ukraine in 2014, a group of volunteers in the small Baltic state of Lithuania, right on Russia’s doorstep, felt compelled to do something.

They decided to call themselves The Elves, evoking the benevolent mythical creatures who quietly hammer away behind the scenes.

Their leader, who speaks in a brusque and authoritative voice, goes by the pseudonym The Hawk. Most of them do not use their real names online to make it harder for Russian trolls to track them down.

The Hawk saw Lithuania — a former Soviet state that broke away some 30 years ago when socialism crumbled — as being particularly vulnerable to the Kremlin disinformation machine.

All unpaid volunteers whose day jobs range from accountants to media or IT specialists, The Elves developed their own strategy to counter disinformation.

Operating across nearly a dozen countries in Europe, they monitor fake pro-Kremlin profiles and pages on social media, particularly on Facebook, and debunk disinformation through simple explanations and even memes.

Daniels, 17, was supported by his teammates, sponsors, club management and owners in a move that might be a watershed in Europe.

Despite liberal social attitudes towards LGBT+ issues in many countries on the continent, there is still only a tiny number of professional male athletes in team sports who feel they can be fully open about their sexual identity.

A handful of high-profile examples recently in football, rugby and ice hockey around Europe give some hope that attitudes are changing.

7. ‘I was praying we would die quickly’, Mariupol survivor says

When Lia and Alex woke up in Mariupol to the loud booms of explosions and shrieks of car alarms on 24 February, the young Ukrainian couple did not expect they would soon have to bury their loved ones in their own garden and fend off cold and starvation as Russian troops pounded the southern port city into dust.

Yet, they managed to survive and leave a city that now lies in ruins, narrowly escaping death in Russian bombardments, and avoiding being captured by Moscow’s soldiers as they hunted for any Mariupol defenders.

The pair are now sitting at the newly-formed Lemkin Centre for Investigating Russian War Crimes’ office in Berlin, telling their story in vivid detail as part of a programme collecting witness testimonies about war crimes to help tribunals, journalists, and future historians build a case against those responsible.

Iceland’s most famous black sand beach is a lure for international visitors, but a combination of geology and the raw power of the ocean make it a deadly attraction.

The black sands and roaring waves of Reynisfjara beach are among the main attractions along the scenic south coast of Iceland. It’s known for its haunting beauty, but tourists have lost their lives to sneaker waves that carried them out to sea.

Now local authorities are working on a plan to make the area safer.

9. Forgotten in Albania: Afghans dream of America one year after the Taliban takeover

Scenes of frightened Afghans scrambling to leave the country by any means possible in August 2021 following the withdrawal of United States forces and the Taliban takeover of Afghanistan were broadcast on TV screens across the world to widespread horror and outrage.

The hasty withdrawal and subsequent collapse of the government left a power vacuum that was filled entirely by the Taliban, a violent fundamentalist group committed to reversing any democratic progress made in the country of over 38 million during the past two decades.

A year later, in the small Albanian coastal town of Shëngjin, nestled between the sparkling Adriatic sea on one side and a high mountain range on the other, several hundred Afghan refugees are stuck in limbo.

For them, the horrors of August 2021 are still fresh — a painful reminder of the moment when their role in securing a free and egalitarian future for Afghanistan evaporated into thin air.

Russia’s war has brought death, destruction and misery to Ukraine over the last nine months. But how has the conflict changed the rest of Europe?

Euronews looked at the situation in more than 20 European countries and how war on the continent has impacted people and politics.

11. ‘If I want a shower, I boil a kettle’: How people in Spain are struggling amid soaring energy bills

Last winter, father-of-two Miguel turned off his electric boiler at his home near Madrid and began putting on extra layers to keep warm.

Rising energy prices and inflation have accelerated a backward slide that the 61-year-old says began a decade ago when his pay was cut.

“If I want a shower, I boil the kettle and shower like that,” Miguel told Euronews. “In summer it’s no problem and to be honest I’ve got used to it in winter, too. As for the heating, I live in a flat, so I get the benefit of the heat from the apartments below.”

Miguel is not alone. Many across the country are having to tighten their belts as already rising energy costs have been exasperated by the war in Ukraine and Russia’s decision to reduce gas supplies to Europe.

When the leader of the Russian Orthodox Church supports Moscow’s invasion of Ukraine and calling the conflict “war” can land you in jail, it takes courage to speak out.

But that is what Father Grigory Mikhnov-Vaytenko has been doing ever since the Kremlin first set its sights on its western neighbour.

Father Grigory, who was once a priest in the Russian Orthodox Church, has set out to prove that not everyone in the country stands behind President Vladimir Putin’s act of aggression.

She only formally took over from Boris Johnson on 6 September, but after a premiership of chaotic policy decisions, freefalling economic indicators, media gaffes and high-profile resignations — not to mention opinion polls which saw her Conservative Party slump while the opposition Labour Party surged — Truss called it quits.

Truss is officially Britain’s shortest-serving prime minister ever, beating the next candidate George Canning who was PM for 118 days until he died in office in the 1820s.

Who are some of the other short-term prime ministers in Europe?

Read the story to find out.

As president of the 21-member Sámi Parliament in Finland, the single most important piece of legislation on his desk right now — one which impacts all Sámi, the EU’s only recognised indigenous people — looks likely to fail for a third time.

“It’s frustrating that Sámi human rights don’t seem to have any kind of meaning to the Finnish government,” he told Euronews.

Other Sámi people are uncharacteristically blunt in their criticism of Finland’s Prime Minister Sanna Marin in particular, over her perceived failure to act to safeguard their rights: accusing her of broken promises, and caring more about the rights of people in other countries than at home.

The war in Ukraine and suspected acts of sabotage on key infrastructure are forcing European countries to rethink their approach to what is critical and who should control it.

And here, it’s not so much Russia that European Union leaders fear, but China.

“I just don’t understand why the government treats us like criminals,” teacher Maria Nemes told Euronews. “I love my students. I love my colleagues. I love my high school.”

Nemes is one of more than a dozen Hungarian teachers who have been sacked for “civil disobedience”.

The 50-year-old English teacher was dismissed with “immediate effect” in November, after protesting the decision of local authorities to fire some fellow teachers for staging a walkout.

Anger among teachers has bubbled away for years over low wages and gruelling working hours, but new strike laws have pushed them into open conflict with the government. 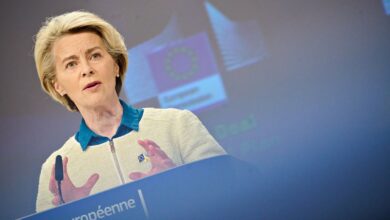 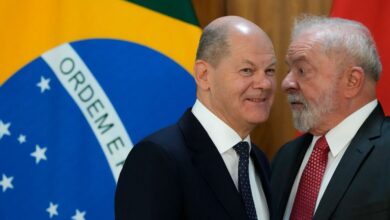 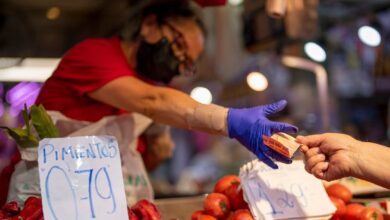 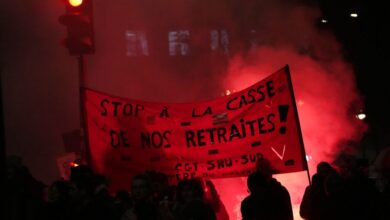 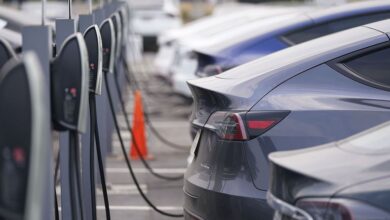 European carmakers urge leaders to match ambitions with other regions 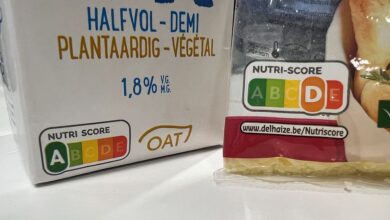