When a then-29-year-old samurai-inspired warrior and a 42-year-old veteran faced off inside the octagon in June, nobody could have predicted the all-out war that unfolded between the two.

When the two faced off, nobody expected Teixeira, the +162 underdog (per Vegas Insider at the time), to go toe-to-toe with the -188 favorite in Prochazka. Someone Teixeira’s age should not have been able to go at the same pace as Prochazka, but the Brazilian held his own and then some. In the end, it was Prochazka who overcame the odds and beat Teixeira to become champion.

The Sporting News looks back on Teixeira vs. Prochazka, an instant classic that has been awarded the 2022 MMA Fight of the Year.

Round one saw Prochazka stalk Teixeira at the southpaw stance, but Teixeira landed swift kicks to the chest right away. Prochazka moved forward with each shot, showing his resilience that would pay off by the end of the bout.

Teixeira landed a takedown early and smothered Prochazka. Prochazka escaped and tried to engage with kicks. A single leg by Teixeira connected and then he tried an armbar attempt. A great defender, Prochazka escaped and started landing shots to the face of Teixeira. The crowd already gave both men a standing ovation at the end of round one.

Little did they know what awaited as time went on.

Prochazka started the second round as the aggressor, landing front kicks and vicious punches. A jab and a knee later, Teixeira was down to the floor. While the champion got up, Prochazka would not stop punching him. With his hands down, Prochazka was confident. Fighting in the clinch, Teixeira landed a left hook and finally dropped Prochazka. Teixeira landed big shots by the cage and landed elbows that cut Prochazka.

Round three saw Prochazka stalk Teixeira. Teixeira would try and take him down, but Prochazka was able to slip away and forced him back to his feet. They traded leg kicks, and then Prochazka landed more vicious hooks. Trying for a knee, Teixeira isolated the leg and got him to the floor. Back up, Prochazka landed a brutal punch to the gut, followed by a back elbow. It was a much better round for Prochazka, but somehow, Teixeira survived.

Round four, which was unfamiliar territory for Prochazka inside the octagon, was the best round of the bout.

By the cage, Teixeira landed hooks and kicks. Prochazka countered with combination blows but was taken down again. Then, both reversed holds on the floor, from Teixeira on top and an arm-triangle attempt to Prochazka escaping and pounding at the face of Teixeira. Teixeira escaped and took the back of Prochazka, but the latter ended up on top.

Then things took an even wilder turn.

The crowd was elated as the fifth round commenced. Teixeira seemingly had the bout won with a big right that stunned Prochazka. Prochazka was out on his feet, but Teixeira went for a guillotine attempt instead of finishing him off. He failed, and Prochazka was able to wake up. While Teixeira landed big blows, including a hard jab, the fact that Prochazka was surviving was not a good sign.

Taking Prochazka down, Teixeira was on top. Then, using the cage, Prochazka ended up on top. Switching behind Teixeira, Prochazka locked in the rear-naked choke and won with 30 seconds left.

🤯@JIRI_BJP GETS THE SUBMISSION IN THE FINAL SECONDS!!! WE HAVE A NEW CHAMPION!!! #UFC275 pic.twitter.com/A2v5S1YCTS

In total, both fighters combined for 211 shots, with Teixeira landing five takedowns. It was a performance to remember by both, as opposites worked well off the other.

A rematch was scheduled for UFC 282, but Prochazka injured himself training before fans could get a second helping.

We will have to savor the original for now, which was rightfully named The Sporting News’ 2022 MMA Fight of the Year.

For three rounds inside Madison Square Garden, Dustin Poirier and Michael Chandler did what they do best: outshine everyone.

It was non-stop action, a calling card of the two. Poirier started the fight with big shots, ad Chandler countered with a patented takedown. For the next five minutes, each tried finding an edge. Poirier would badly bruise the face of Chandler with vicious blows to end the round.

A battered Chandler wisely went for the takedown in the second to recover. He was in his comfort zone, even with Poirier looking to counter any submission attempt.

Poirier landed huge lefts in the third. Chandler went for a big takedown, but Poirier reversed the position and ended up behind him. Although he fought out of it initially, Chandler could not escape the rear-naked choke, giving Poirier the submission win.

There was tension following the bout due to what looked like a hook to the mouth of Poirier by Chandler. However, both showed the other a sign of respect after. Chandler continues to perform well in MSG and the UFC despite losing three of his last four. Poirier earned his eighth Fight of the Night bonus and regained momentum following a loss to Charles Oliveira in 2021 for the UFC lightweight title. 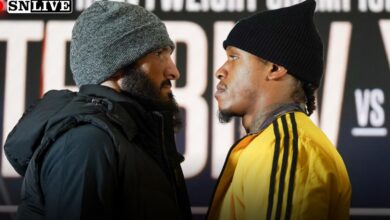 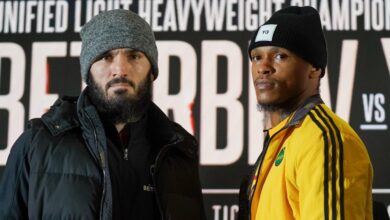 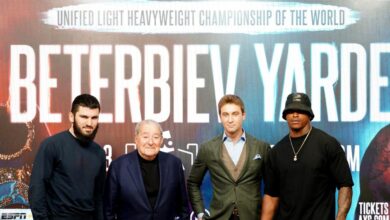 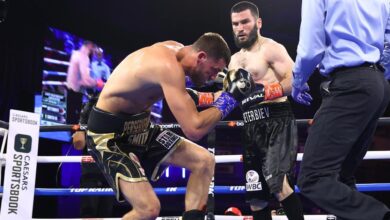